A new Equality Strategy for Leicestershire 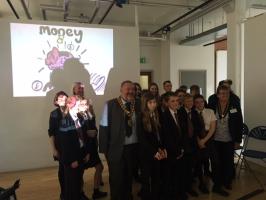 Citizens Advice Leicestershire were awarded a SHIRE Grant to deliver a money/debt management project for school-aged students identified by Redmoor Academy in Hinckley. The project included the following elements:

The project idea was based on consultation/feedback with young people, who had highlighted financial vulnerability as a significant concern for them. Young people also suggested they would be more interested in learning about money management from other young people, or having advice in their schools, youth centres, and using current technology to make information more accessible.

The project supported approximately 20 young people to take leadership and personal responsibility in their lives and support those around them, with regards to financial management. This was achieved through; peer support, developing skills to access financial advice, and raising the awareness of staff in the school to identify young people who may be financially disadvantaged and signposting to relevant services.

A celebration event for the project was held in Hinckley on 22nd September 2017, where the young people demonstrated how the project had helped them to develop confidence and self-esteem through their involvement with the project.

A short film about the project can be seen here.

A leaflet about the project can be seen here.